A Short Getaway to Inner Mongolia

by Regin Reyno
I rushed to Beijing Railway Station after my 2 classes that day, to catch the overnight train. Hundreds of people were busy in that Beijing Railway Station-one of the main train stations in Beijing going to different provinces in vast China-that night, so I had a hard time finding my travel buddies-colleagues who are also addicted to travel and treat it as a form of therapy and escape from our usual classroom routines. We were heading to one of the most exotic destinations in China, a land where the culture and landscape is more Mongolian than Chinese. Inner Mongolia. Technically part of China but it’s “Mongolian”. (kinda confusing, I know).  Some of the people’s ethnicity is Mongolian (although they are Chinese citizens), they have their own language and form of writing (which is obviously Mongolian)-so though part of China, it’s like visiting a different country. 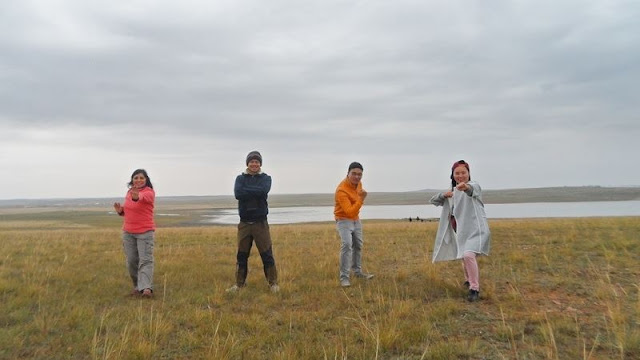 After some searching and calling, I was able to see them. They were ordering food at an American fast-food chain.
We were excited, obviously. We were promised by a camping experience in the vast grassland, star-gazing, bonfire, Mongolian horse riding, sunrise watching, camel riding in the dessert, and desert sand activities. What a perfect way to spend the weekend.
Living in Beijing, these kinds of environment is a respite for us.
Our train departed at around 11:00 pm. Lying on our beds, we were talking to each other, making jokes, eating some snacks. It was good that they put us in one compartment.
Chinese trains are really impressive. They make traveling in China very convenient and affordable. It was a wonderful time-you know-being in an overnight train with your friends/colleagues. Although the compartments are small and the beds as well, it was pretty comfortable. We had a good night’s rest-sleeping through the snore of some of the passengers.
5:00 am, we arrived at Hohhot, the capital city of Inner Mongolia. It was still dark. As we went out of the train, we felt a big drop in temperature. It was early autumn in China. Summer has just ended. And in Beijing, the temperature is still a little bit warm (about 20 degrees Celsius). But here in Inner Mongolia, it was so cold. (about 8 degrees Celsius) Our tropical bodies were freezing.
We were told by the travel agency that they’re going meet us in a certain place in the city at around 7:00 am. We arrived early so we just waited for a while in the train station. The heaters weren’t turned-on yet so it was a cold wait in that beautiful train station.
We were impressed by Hohhot’s train station. It’s a big building likened unto a ger or yurt, the home of the nomads in Central Asia.
At around 6:30 am we took a cab to the city proper. We were impressed by Hohhot’s development. Organized and wide roads, massive building, clean surrounding, beautiful lawns and flowers-although it’s laid-back compared to Beijing, I can say that it’s a booming city. At that time many people were not yet up, so that beautiful morning was unlike any mornings that we have in Beijing were people are rushing going to work.
We were now hungry; hungry from the overnight’s journey. Breakfast time! Yay. We want to experience the food in that place so we chose a local restaurant. We ordered, mantou(Chinese steamed bun/bread), youtiao (Chinese friend breadstick), boiled egg, and Mongolian milk tea called Suutei tsai. Everyone was excited about the milk tea as it was a cold morning. It’s nice to sip a warm cup of milk tea, and “hmm what does Mongolian milk tea taste like?”
When we sipped the milk tea, there was a big disappointment in the faces of sugar-loving Filipinos and American. “It tastes nothing.”, said one of our companions. “It’s kinda salty”, replied one. Nevertheless, I enjoyed it and so goes our breakfast.
We went straight to our travel agency. The agency is located in a guesthouse popular amongst backpackers. It’s called Anda Guesthouse. It is a cozy place-a haven for travelers. We washed ourselves, changed clothes, and did our thing-because they told us that there are no lavatories in the grassland, the place where we will spend our two days.
We traveled from Hohhot to the grassland via a van. It was a 3-hour ride. Along the way, we saw different sceneries from what we usually can see in other parts of China. Sparsely populated places, rocky mountains, wheat fields, sunflower fields, mud houses. The scenery was spectacular. Northern China is really beautiful.
Vast grasslands and gers/yurts indicated us that we are nearing our destination. Our excitement (and hunger, as it’s almost lunchtime) increased. The environment, sheep, and cattle, gers of different kind, the vastness of the places was overwhelming.
Finally we arrived at our destination-a guesthouse in the middle of the grassland. 3-4 gers and a house made of bricks and mud. We will be staying in the gers ala Mongolian nomad. We stood amazed at the scenery-a peaceful scenery where you can’t see anything except for some sheep that graze the enormous space. Then our tour guide Andy called us “lunch is ready!”
Most of the people lived a nomadic lifestyle in Inner Mongolia before. Because of the climate, the ground is not good for agriculture-so most people live by tending cattle, flocks, and sheep. Now you have an idea what our meal was.
“Authentic Mongolian dish”, Andy told us. Boiled lamb meat. “Here in Mongolia, people just boil meat. We don’t cook them in complicated ways like grilling, or frying.” He told us.
And after eating we again were served with tea, milk tea that is-tea with fresh sheep milk. And again, it was not sweet. “Mongolians don’t eat sugar. We don’t use sugar to any of our food”. He must have noticed the discontent in my friends’ faces.
Andy talked about Inner Mongolia, the culture, history, lifestyle and we asked some questions, too, while sipping tea in that dining room. It was a learning experience and a good way to keep our body warm from the cold Mongolian autumn air.
We spent the rest of the day exploring the vast grassland. It was an exotic experience I should say. Way different from the country where I come from or some other countries where I have travelled to. The serenity of the place, the cool air, and the absence of civilization made me very happy. I was just dreaming of this, months before.
There was also a lake near our ger where flock of sheep came in to drink. I thought about David of the Bible when he was tending his father’s flock. Now I know why he brought a harp and sing songs. 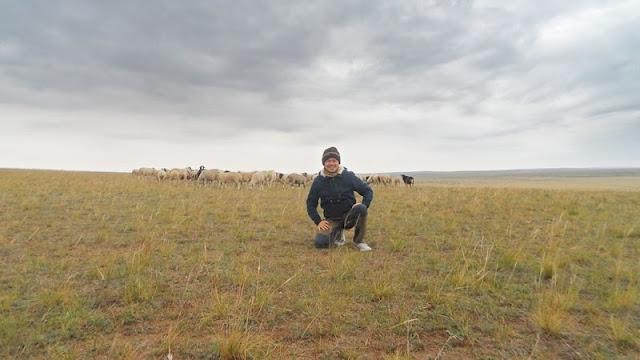 The rest of the afternoon was spent doing archery. The Mongols were famous for their ability to shoot arrows. That’s one of the reasons why the Chinese built the Great Wall. We were given the opportunity to shoot some arrows using a traditional Mongolian bow and arrow. It was not easy as I thought.
As the temperature begins to drop some more, we went back to our ger to have a rest before the horseback riding activity.
Our ger was a simple one. Not the touristy gers that some resorts offer. But I liked it that way. It’s more authentic. There’s a picture frame of Genghis Khan inside-the famous Mongol leader and conqueror. I noticed, most houses and establishments in Inner Mongolia have a picture frame of Genghis Khan. 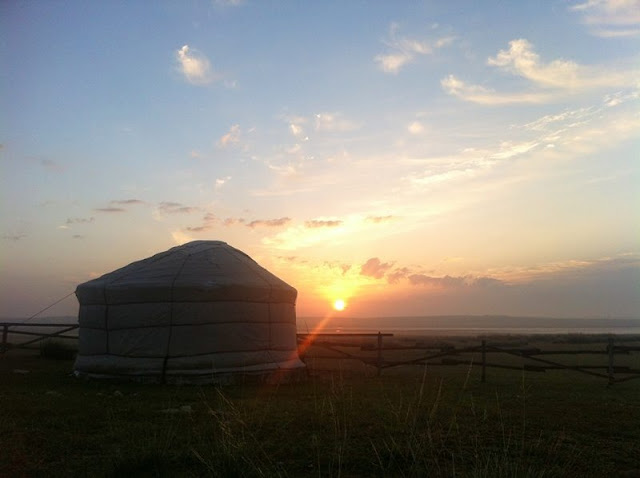 Mongolian horses, though not as big as its European counterpart are famous for its strength. It was the same breed used during battles long time ago. It’s part of the force that conquered almost the entire Asia and some parts of Europe. So having a horseback riding using Mongolian horses in the grassland is something.
After the horseback riding, we can’t bear the cold anymore. Yes, our tropical bodies are not used to it. So we head straight to our ger and to the house nearby to have dinner. And again, It was lamb-boiled lamb and lamb soup.
After dinner, we went out to have star-gazing but unfortunately, it was drizzling so we just stayed in our ger and talked. It was a beautiful moment. The ger has no electricity, no wifi, so it was a good way to just talk and bond with each other. We needed this. After the showers, some of us went outside, gathered cow dung and had a bonfire.
The next day we woke up early to watch the sunrise. Living in Beijing, we haven’t seen the sunrise or the sunset for a long time. Buildings, work schedule, smog, these are the reasons. So seeing the sunrise over the lake and vast grassland was one of the highlights of the trip. The glow of the sun made the whole grassland picturesque.
Breakfast consisted of warm sheep milk, and some traditional grains, and of course milk tea; enough for our energy for our next activity-dessert.
I haven’t been to a desert. So going to this Kubuqi desert made me excited as a child going to Disneyland for the first time. Travel time was for about 3 hours. We made a lunch stop along the way then the next thing we know, we are now on a back of a truck taking us to the dessert. It was a fine day-a perfect day to roll on the sands. 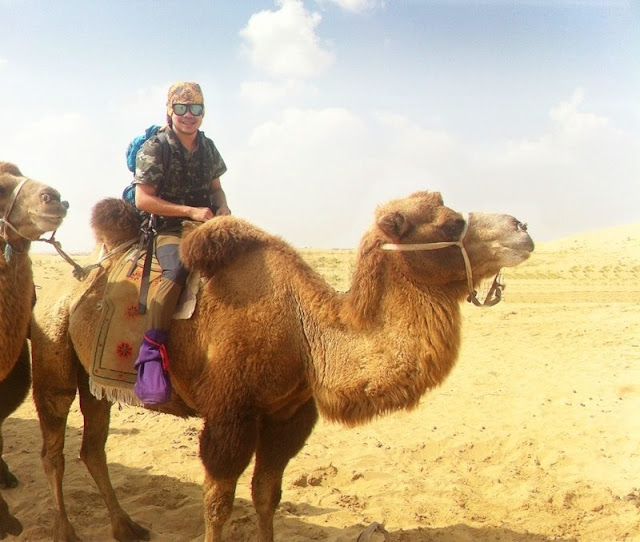 Experiencing a desert for the first time feels fulfilling. “Finally this is it”, I told myself. Camel ride, another first, sand sliding, playing ultimate (Frisbee), and simply hiking on the dessert. My mind imagined how it was like during the times when people crisscrossed the great desserts to trade goods. It was not easy, I supposed. It was hot but I didn’t give a damn. I walked and walked and walked as far as I could. Seeing nothing but sand and camels, it feels awesome. This is not something can you can experience everyday in your life. These kinds of travels make me happy and fulfilled. After a whole day of worthwhile activities, it was now time to go to Hohhot. The journey itself was beautiful. Deserty, mountainous, barren, rocky, the scenery was really new to me.
We arrived in Hohhot safe and sound despite of the traffic in the city that afternoon. I was kind of surprised by Hohhot’s traffic jam.
We explored the city that night, ate in its restaurants, and bought some souvenirs. The city is laidback and beautiful. They even have a walking street.
After taking a shower in Anda guesthouse, we took a cab back to the train station for our overnight train back to Beijing-and as what most vacationers say after the trip, “back to reality”.
I will never forget this short getaway. It was travel experience that opened my eyes. That made me realized the diversity and differences in cultures of this world, the beauty of nature, and how people adapt to their environment.
TRAVEL NOTES
Sleeper train from Beijing: 142 RMB one way
Ger camping with 4 meals and tour guide: 850 RMB
Camel ride: 150 RMB
Horseback riding: 150 RMB
Taxi from Anda Guesthouse to Hohhot train station: 30 RMB
Anda Guesthouse is recommend by Lonely Planet as one of places to stay in Hohhot, Inner Mongolia

*This article first appeared on Expat Travel and Lifestyle magazine issue 32 (March 2015) with the title, Autumn Adventures in Inner Mongolia