In December 2012, I wrote a blogpost about my 2012 travels and thought what might 2013 offer. Our life is full of uncertainties.  We don’t know what lies ahead. So we can only dream of and plan, but still we don’t know what tomorrow will bring.
It was just as if yesterday when I was writing my 2013 travel plans. Time flew so fast.

As I was planning my 2013 travels back then, I was so excited-so excited of the travels that I planned. Planning is really part of the happiness of travels. The excitement, the anticipation and imagination of your future trips surely invoke happiness. Now it's time to look back on what this year has brought.

God is so good. Even though some of my plans weren't realized, yet He gave me travels that weren't in my plans. Even an all-expense paid international travel.  Life is indeed unpredictable, but we are confident that God is always there and will guide us and bless us, and shower us with bountiful blessings.

1. January 2013-Bangkok, Thailand
Yes, I am living in Bangkok, but I still consider myself a tourist, a foreigner. So every experience here, I consider a travel experience as this is a foreign land to me. Although I can say, Thailand is my second home.

I explored more of Bangkok this time. From temples, restaurants, cafés, malls, streets. I’m glad I have explored Bangkok before leaving it soon.

2. March 2013-Sepang, Malaysia
A formula 1 weekend-one of the most memorable weekends in my life, It was a dream come true. I even met my favorite f1 driver, Kimi Raikkonen.

3. May 2013-Central Java, Indonesia
ASEAN Blogger Festival in Surakarta, Indonesia plus a trip to Yogyakarta staying the backpacker’s district called Marioboro and exploring UNESCO World Heritage site Borobudur temple. Airfare, hotel accommodation, meals, tours in central java, were all paid by our sponsors, US Mission to ASEAN and Garuda Indonesia.

It was so nice flying in a 4-star flag carrier from Bangkok to Jakarta and to Surakarta, staying in a 4-star hotel for free! It was a great opportunity to meet bloggers across Southeast Asia. Thank you so much sponsors.

4. July 2013-Ayutthaya, Thailand
My batch Klement in Thailand took the opportunity of the long weekend due to a Buddhist lent celebration and stayed in my place in Bangkok for a get-together. We then explored the ancient city of Ayutthaya, also a UNESCO World Heritage site in the province of Ayutthaya.

5. August 2013-Nakhon Pathom, Thailand
A city 1 hour from Bangkok, it is where the world’s tallest stupa and one of the most important religious infrastructures in Thailand is located. It also has an ancient palace called Sanam Chandra, the rest house of the king of Thailand before.

6. August 2013-Chiang Rai, Thailand
My Klement friends explored the northernmost province of Thailand. We went there to attend one of our classmate’s wedding. We went to the Golden Triangle in Chiang Saen and also visited Wat Rong Khun (White Temple), one of the most amazing temples in the world.

We hired a van from Bangkok. It was a 12-hour drive. It was a happy moment-an epic road trip.

7. August 2013-Vientiane, Laos
Although, it's the rainy season, it didn't stop me from roaming around this wonderdul city. I enjoyed taking photos of Patuxai at night, mingled with fellow travelers and foreign workers, and tasted a Lao version of somtam. I never get tired of this laid-back city.


8. November 2013-Ratchaburi, Thailand
The land of the kings, this province is 2-hour drive from Bangkok. Maeklong river flows through it. It is an opportunity for me to experience Thai rural living.

9. November 2013-Phsar Prum, Cambodia
Visa run to this Cambodian border near the Thai province of Chantaburi. Awesome scenery can be seen along the mountainous road. And as what most Filipinos do upon reaching the border, I ate lots of balut as it is available in the kingdom of Cambodia and nowhere to be found in the kingdom of Thailand. Balut time! so delicious.

10. December 2013-Vientiane, Laos
One of my favorite cities in Asia, I never get tired of Vientiane. This time, I made lots of friends, both Filipinos and foreigners and ate lots of Lao food.

Apart for my travels, I also had a wonderful time in Bangkok watching a lot of live ABL games this year with my friends and even playing with Thailand Slammers star Filipino Froilan Baguion.


And to wrap up 2013, I was named by Southeast Asia Backpacker magazine as one of the 50 Inspiring Travel Bloggers of 2013.

So that has been my year. Praise God for His mercies endure forever. 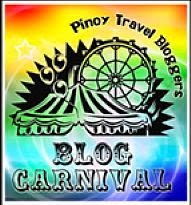 This is a PinoyTravel Bloggers' Blog Carnival entry for December 2013. "The Pinoy Travel Bloggers Closing the Curtains on 2013: Love, Learn and Living" as hosted by Brenna Bustamante of The Philippine Travelogue.