El Nido is a coastal town in Palawan, Philippines blessed with many islands in its vicinity. It is part of the Banana Pancake Trail: a well-trodden backpacker trail in Southeast Asia. Many travelers flock to this place-almost all year round-due to its islands and beaches.

Beautiful limestone islands, white-sand beaches, wonderful corals, friendly locals are what attract the tourists. And in coming to El Nido, there is one activity that you shouldn’t miss; and this is what most visitors do in going to El Nido: Island hopping.

With its many beautiful islands and lagoons, this is the number one attraction and activity in El Nido. It’s really crazy and unimaginable if you’re in El Nido and don’t do this. It’s like going to Cuzco in Peru and not visiting Machu Picchu or going to Xi’an, China and not going to the Terracotta Warriors. Especially, as El Nido Town proper has little to offer. (The beach there is crowded with boats, bars, and restaurants) 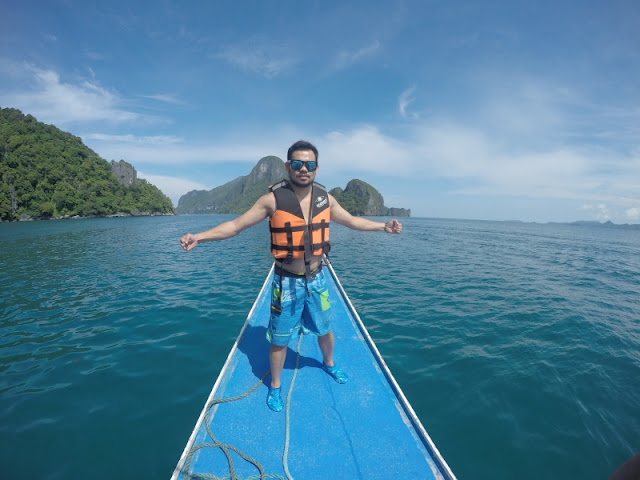 Tour agencies offer different kinds of tours. Tour A, B, C, D and E. Each tour has its own destination, so each is totally unique from the rest.

Tour C is the favorite of many, and even considered one of the best tours in world. Followed closely by Tour A. That being said, on our first day in El Nido, we immediately opted to do Tour C. (The weather in Palawan is unpredictable, so it’s better to do the best tour first while there is no typhoon yet.)

From our lovely Sea Cocoon Hotel, we were fetched by our guide and walked for about 4 minutes to the pier. Tours start at 9am but you are required to be there by 8:30am. We passed by lots of shops, restaurants, bars, diving and tour agencies. The vibe is like Koh Phi Phi Don, Thailand, albeit less crazy.

As the boat’s rope was released we were so ecstatic! Most of us haven’t been to sea for quite awhile. Seeing the bluish-green waters and blue skies with few clouds made us pumped up. Our guide explained what will happen in the tour and gave us some information and safety precautions.

There are other people on the boat, too. So that was a good opportunity to make friends. We chatted with them while enjoying the beautiful scenery of karst islands.

First Stop: Helicopter Island
This island is shaped like a helicopter, hence the name. People’s imagination here is really working. They can just picture anything out of of rock formations, stalactites, mountains, etc.
While the boat is docked, our crew started to cook our lunch as evidenced by smoke coming our from the boat’s rear. We then enjoyed swimming, snorkelling, and picture taking. (Those who are scared of the water) 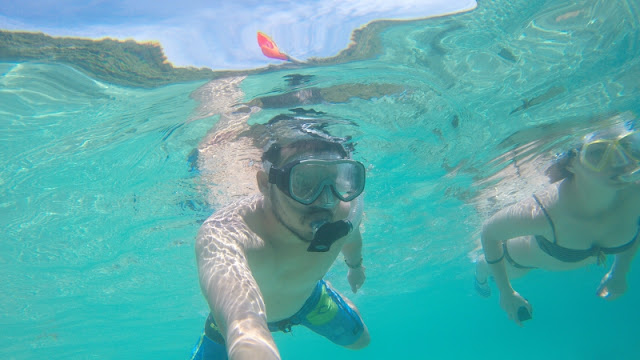 2nd Stop: Hidden Beach
Not to be confused with Secret Beach, this beach is one of my favorites in El Nido. It’s white sand and surrounded by jagged rocks. It is really hidden. So there’s a lagoon-like feel to it: clear, peaceful water. 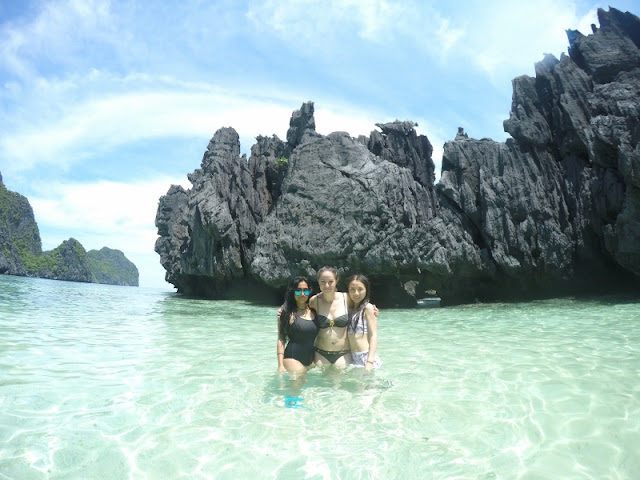 3rd Stop: Star Beach/Lunch Time
Along the way, the view is really beautiful. So peaceful, not a lot of tour boats. And the majestic karst-so many in number-are just a beauty to behold. So apart form the usual snorkelling and swimming, which most people are focused on, the sight seeing itself while on the boat is what makes this tour special. 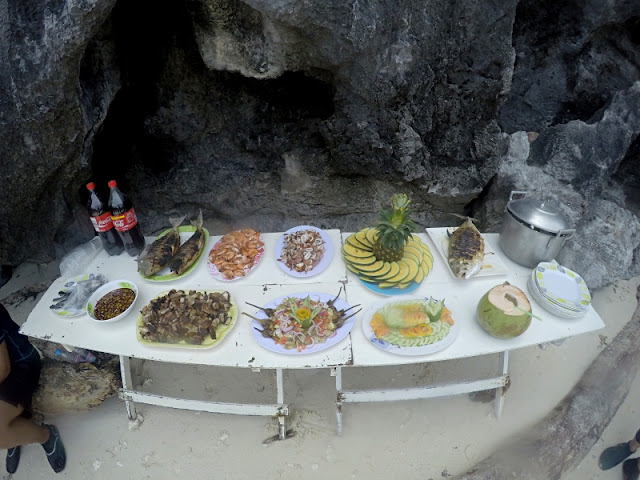 We passed by Matinloc Shrine, and some other beautiful island scenery before the anchor was thrown for us to have lunch at Star Beach. The boatmen/guide turned into cooks, and as they put the final touches to our elegant Lunch on The Beach, we wasted no time. My friends continued on their newly found snorkelling skill while I just sat on the rock, relaxed, beholding the beauty of the place and savoring the moment.

4th “Stop”: Secret Beach
Our 4th stop was supposed to be my favorite. One of the things that attracted me to El Nido is The Secret Beach. This is the inspiration of Alex Garland when he wrote his novel, The Beach. Alex, a Londoner stayed for months in El Nido. It has been said that this Secret Beach is actually what’s in his mind when he wrote the novel and later on turned into a movie. So this is the actual Beach from the movie The Beach.

I was excited to see and experience it. But unfortunately, our guide told us that the waves were too strong that day, and it’s dangerous to enter the only entrance going to it; a small hole.

We still went to the site and witnessed that hole-in-a-wall entrance. It was really dangerous that day. Although we were disappointed, but still happy that our safety is the number 1 priority in this tour. We behold the mountainous rocks that surrounded the Secret Beach. It was majestic. 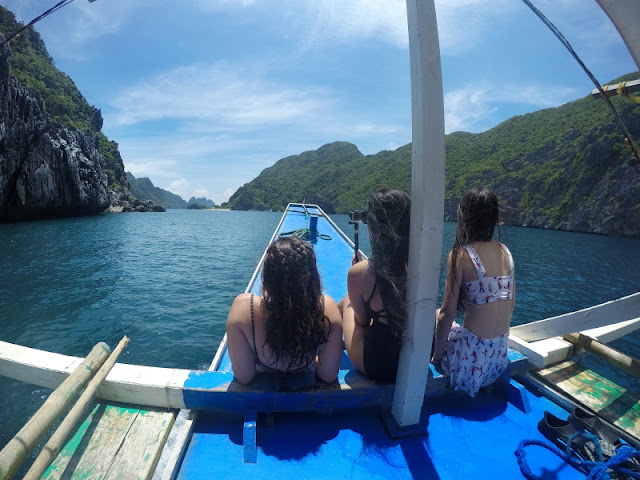 5th “Stop”: Matinloc Shrine
There’s an island where a shrine was built. We were supposed to stop by and have pictures, but since it’s not free anymore, most of the passengers opted to skip it: too bad. So we just slowed down and had a glimpse of the shrine. I hope El Nido government will stop this nonsense admission fees. (Although they said the the fee will go to the renovation of the shrine… but c’mon…)

6th Stop: Reef/Snorkelling Area
Our last stop was a reef where you can have a wonderful snorkelling experience. The corals were so alive and colorful. Lots of sea creatures aboud, as well. We spent some time just relaxing and exploring a different world. This is were most of us had a really awesome and different experience. I’ve experienced snorkelling in Krabi and Koh Phi Phi, but this, so far, is the best! The corals, fish, sea urchins,… the reef is so alive! There’s also a deep part, a sudden drop; so deep it turned dark blue. That was pretty scary. 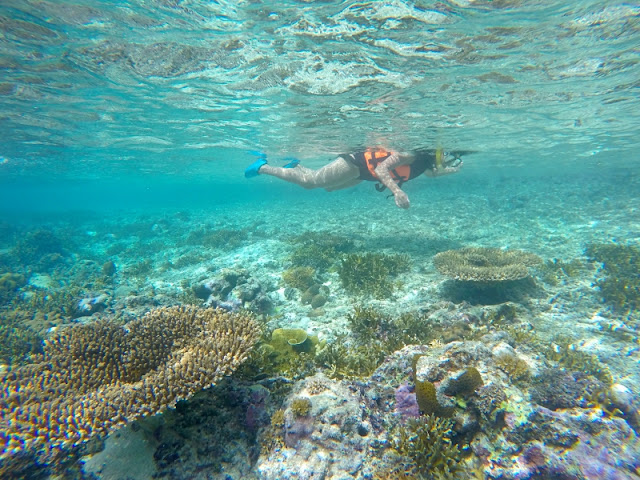 After the whole day of island hopping, we were back at the town proper happier and tanner. It was indeed a fulfilling day. The best tour in the world? I can easily understand why. 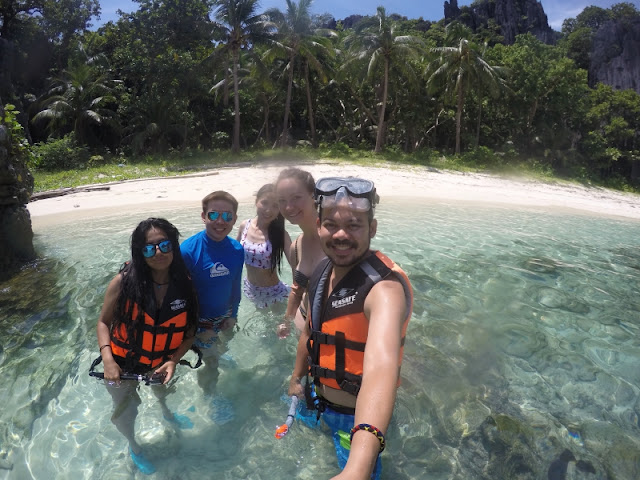 I recommend this agency for tours in Palawan